After thinking more about the brief and researching other methods of recording information and creating art outside of photography, I have decided to look into sculpture and it’s history.

The earliest recorded sculptures are from prehistoric times. One of the earliest sculptures was named The Venus of Tan Tan and was found in Morocco. It is around two and half inches long and is dated at 500,000 – 300,000 BC. Another sculpture, dated around 230,000 BC is called The Venus of Berekhat and is around an inch and a half long. Both sculptures vaguely represent the human form.

The Venus of Berekhat (left) and The Venus of Tan Tan (right)
(Image sources: http://fromaltamiratoandy.blogspot.co.uk/2012/11/upper-paleolithic-sculptures-venus.html & http://donsmaps.com/ukrainevenus.html)

Small, human like sculptures like this have been donned ‘Venuses’ and have been found mainly in areas of settlement rather than burial grounds, leading archeologists and historians to believe that they were used in rituals. These rituals could be fertility rituals – there are later dating Venuses that show larger women, which could symbolise pregnancy, however that is speculation and it us not clear what the definite use of these Venus sculptures was.

The time between these Eras is called the Mesolithic Era and this acts as the bridge between the two time periods. This time brought more bas-relief art – sculpture where a material is carved away to create an image that is often three dimensional. This time also showed more art that represented the human form, as humans began to recognise the self within the world around them. This led to art such as the Thinker of Cernavoda, one of the Mesolithic Era’s most recognised pieces of art.

The Thinker of Cernavoda is a piece that shows introspection, and is one of the oldest pieces of artwork to show this. This was a turning point during the Mesolithic Era at which humans began to examine themselves as well as the world around them, and artwork represented personal reflection of the self instead of solely just figures of fertility or hunting. The figure was made from terracotta and around the same time as it was discovered similar figures, both with and withouts heads, were found in similar positions, all relating to introspection and self reflection.

As humans settled there became a demand for decorative art, as well as decoration for functional items. Pots, vases and various utensils were decorated and sealed with fire, having been carved, painted or stamped.

It was during this era that recognisable sculpture such as the Egyptian pyramids were first thought out. Originally North and South Egypt had adopted different burial rituals as North Egypt was wet and therefore buried their dead below their family houses, whereas South Egypt was dry and tended to bury their dead away from their settlements. As the two halves of the country came together their rituals became more organised, and they decided to bury their dead below ground with a flat roofed sculpture above. This eventually, after much change and failure during building, became the base for the famous Egyptian Pyramids.

This era also witnessed the first Bronze statues; the Indus Valley Civilisation created a well known sculpture called the Dancing Girl of Mohenjo-Daro which is dated to 2500 BC. This sculpture depicts a long-limbed female, with well defined features.

The Indus Valley Civilisation were also well known from their terracotta and stone statues that depicted human forms as well as animal forms.

The Eastern Mediterranean Era of Sculpture 2,000 BC – 1100 BC (approximately)

The time that followed this era was stagnant in terms of new development, but instead was a time of slow, continuous experimentation. The creation of new types of sculpture became prominent during the era of Greek Sculpture, from around 650 BC – 27 BC.

The Era of Greek Sculpture

This era is split into many smaller eras that include Early Classical, High Classical and Late Classical eras and later on Hellenistic Greek Sculpture. The Hellenistic era ran from the death of Alexander the Great to the death of Cleopatra in 31 BC.

During this time Greek culture globalised and brought with it the change from classic realism within art to expressionism and heroicism. Alongside this, knowledge of human anatomy and features developed, leading sculptors to create more finely detailed human forms.

Donned the ‘greatest example’ of Hellenistic Greek Sculpture, the The Altar of Zeus at Pergamon was created between 166 and 156 BC. It is a 370 foot long altar the depicts the fight between the Gods and the giants in Greek mythology.

The Hellenistic Era of Sculpture focussed less of peaceful depictions of the human (or God or Giant) form and more on excitement and strong feeling within the characters. By using a bas-relief technique to create this piece the artist – King Emends II – was able to relieve the material so well that it looked almost as if the characters stood free from the marble. This monumental piece allowed for the development of Greek sculpture within art and architecture, making way for Greek Sculpture to be among the greatest in the world, copied and admired for centuries afterward.

Greek Sculpture was characterised by the new type of expressionism it showed; using dramatic posture and poses, expressive gestures and detailed textures. This was a big corner to turn as it paved the way for more expressive artwork throughout the following centuries, up to the present day. However, Greek sculpture was not properly ‘discovered’ until Early Renaissance artists in Italy came across it around 1700 years later, at which point it became the main inspiration for artworks created across the next four centuries.

The Celts’ talents lay within goldsmithing and blacksmithing. They were able to create highly detailed metalwork such as one of their most well known pieces – the Broighter Collar, created around 100-50 BC. Named after the location it was later discovered, the collar was created with a matching crown named the Petrie Crown, which was named after it’s former owner – an antiques collector. 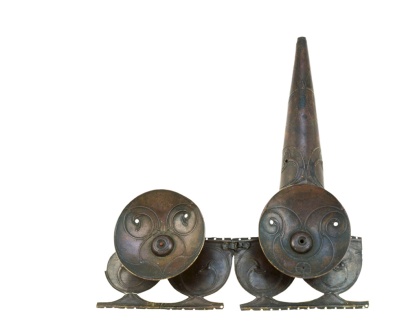 Bronze head-dress known as the Petrie Crown, unlocalised. Early Iron Age, second century ad. The find-place is not recorded. It is a complex object which was assembled expertly using rivets and solder. The components, which were probably sewn to leather or textile, formed part of an elaborate horned head-dress. One cone survives attached to a dished roundel and evidence for another can be seen on the back of a second roundel. The roundels are attached to plates which have openwork voids creating the impression that they are composed of running semi-circles. Cast sinuous trumpet forms terminating in lentoid bosses and spirals ending in bird heads achieved low-relief ornament. The bird heads on the cone and discs of the crown were once filled with red enamel, as were settings in the bosses on the discs, one of which still contains an enamel stud. P869; P870. D. of roundels 5.1 cm. Stokes 1883, 473–80; Kelly 1983, no. 36; Raftery 1983, no. 821, 260–61. (displayed as part of “Kingship & Sacrifice” exhibition)

(Image source for both images: https://arthistoryleavingcert.com/pre-christian-ireland-2/iron-age-la-tene-in-ireland/)

These two pieces, particularly the Petrie Crown, shows the characteristics of Celtic Sculpture in terms of the detailed circular metal discs connected by rivets, and the bronze bands and adornments. The design includes symbols and characters such as the sun symbol, alongside spirals and animal depictions such as birds. This type of symbolism used in combination with the metal work is symbolic to Celtic Sculpture, however it was not until later on when the continent became more Romanized that these pieces became more popular and widespread, leading them to be traded and imitated around the world.

It is interesting to look at how the eras BC influenced each other, and consequently influenced modern day art and all that came between. I will be exploring work in the AD eras soon.

What inspiration am I taking from this information?

After having spend time researching the different eras of BC sculpture I am interested primarily in Neolithic sculpture and Greek sculpture.

These elements are what interest me most as I feel that they relate to the boundary between art and emotion; how by creating a piece of art that represents human emotion and character the viewers of this work can resonate with the feelings depicted and the story being told.