Before we attempted to vacuum form anything we first looked at the process and how other artists had used vacuum forming.

Of all the artists we looked at one of the images that struck me was Les Levine’s Plug Assist #2 – created  in 1966. It is made from Vacuum-formed Uvex and is currently held in the Art Gallery of Ontario.

This particular piece resonated with me as it made the think of boundaries. To me, this chair looks as if it is trying to break a physical boundary. This is because instead of fully vac forming the chair the process has not been completed, and instead the chair looks as if it is in transition from one place to another through this physical boundary. The webbing appeals to me as it makes the chair seem as if it has been paused mid movement through the plastic.

Another artist whose work I was particularly interested in was Iain Baxter&. This piece is called Still Life with Six Colours. Not much is written about the work so I am unsure whether the paint was applied during the vacuum forming process or after, however I appreciate the simplicity of the piece and it’s experimental value.

After looking at how different artists used vacuum forming we began to learn the process for ourselves. In a group, we first cut a piece of the 0.25mm thick plastic to the size of the vacuum former. We used a piece of wooden board that was the correct size and added 10mm onto each side to give the former an edge to grip onto.

We then placed this piece of plastic on the top of the machine, after which a clamp is pulled down to keep the plastic in place whilst it is heated and formed.

Before we placed the plastic on top of the former we had chosen a selection of objects to form around. We placed them on the forming tray beneath the plastic. In the picture below you can see how the excess material is needed so provide an airtight seal so that the vacuum can work. If it is not airtight the vacuum will fail to suck the plastic down around the objects.

After 20 seconds we pushed the heater back to see the plastic. We could tell by the consistency and look of the plastic that it was hot enough to be vacuum formed, so we pulled the lever at the side of the machine which pushed the objects on the tray up into the hot plastic. 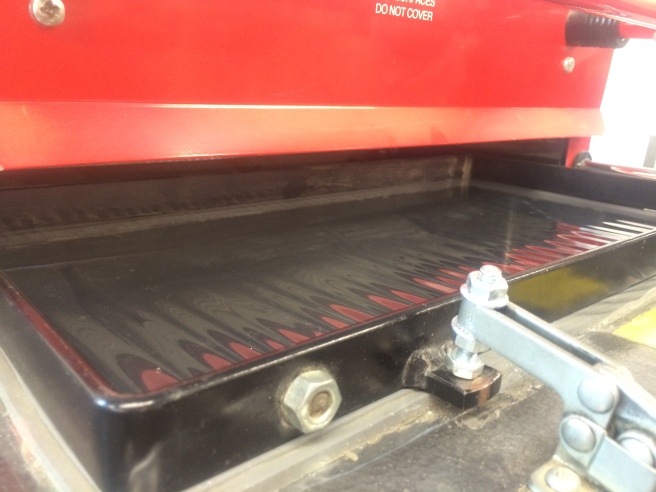 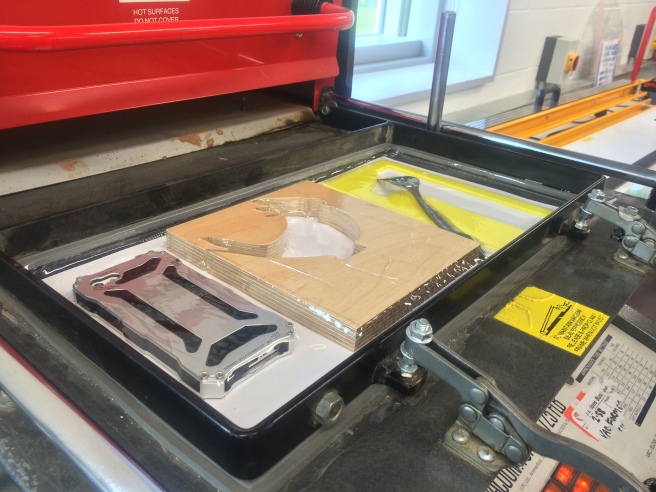 This was our final product after we had released the clamps and removed the objects from the plastic.

For experimental purposes we tried using some objects that were less robust in terms of material.

We tried using food, which worked well but due to the pressure of the vacuum one of the pieces of fruit burst. 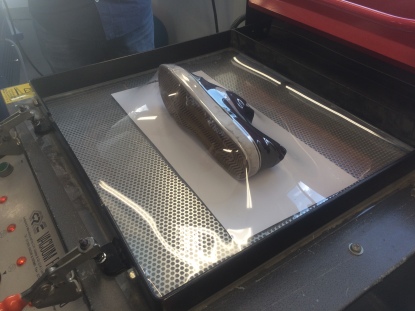 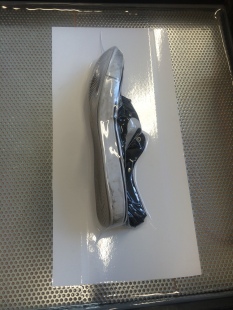 We also tried using a shoe made of fabric, the rubber sole stayed in shape however the fabric part of the shoe was compressed and let to a deformed outcome.

We tried using different materials to determine what does and doesn’t work for future use with the vacuum forming.

I really enjoyed being introduced to the vacuum forming machine and feel that it could be an interesting piece of equipment to use within my project.

So, what ideas has vacuum forming given me?

The idea that stuck with me most after this session was the idea I had initially when looking at Les Levine’s Plug Assist #2; looking at boundaries. Whilst we were talking about how to use the vacuum former with out tutor he discussed with us the possibilities of creating webbing effects and different styles of vacuum forming which variables such as heating time and type of plastic. I would like to use vacuum forming to experiment with how I can interpret ‘boundaries’.