Continuing on from yesterdays session I approached Kostas today and we both felt that the cast was ready to be used in the vacuum formed.

Before we placed the cast int he vacuum former we discussed what material would be best to create the webbing effect causing the vacuum formed outcome to look as if someone was pushing their hands through a flexible material.

However we realised that as the fingers of the hands stood away from the background the vacuum forming machine may vacuum the material around the fingers meaning we would be unable to remove the cast from the plastic. To avoid this I used clay to create the webbing on the cast that I wanted to appear of the vacuum formed result. This meant I would be able to remove the cast without it breaking.

We decided that the best way to find out what material worked the best would be trial and error, so we began with a 0.5mm thick sheet of clear plastic.

In the above image you can see the original cast with the clay webbing, above it is the sheet of clear plastic ready to be heated and vac formed.

When we removed the piece from the vac former we examined it and found that the material was too thin, as too much detail has been captured meaning that the webbing effect was lost and did not look how I wanted it to. We then decided to try again with another thicker material that we thought may hold the webbing effect better, so we decided on a 1.5mm sheet of white plastic. 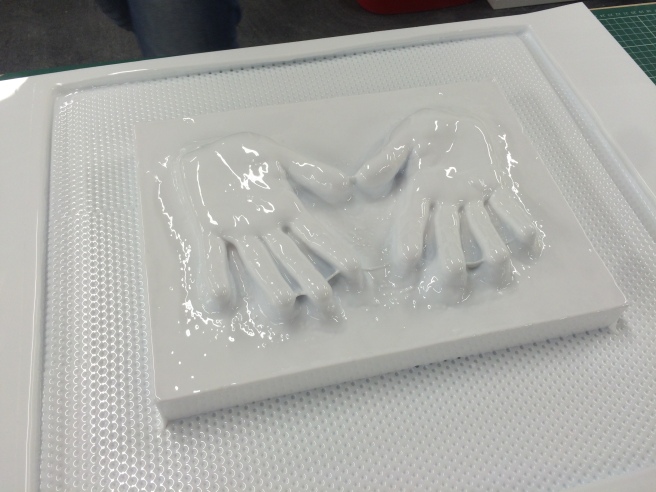 Although the final effect of this thicker material was not as smooth as I had hoped it was definitely an improvement on the first. There was a webbing effect produced on the plastic and this was closer to what I had hoped to achieve.

I sat down with Kostas and we discussed how to proceed from here as I was still generally unhappy with the product. The effect I originally wanted to create was similar to that of Julian Palast’s Skin Deep series – a solid piece that gave the visual effect of being flexible, as if the material was being pushed from the other side. This is not what I ended up creating in my experimentation.

I decided to go away and rethink my final piece, and how I wanted it to look. I will be revisiting my proposal and thinking more about the medium I am using.