After last weeks experimentation and proposal reflection I had decided to use plaster as the medium for my final pieces. So today I went to see my 3D tutor Kostas in the 3D lab to begin the process of creating my final pieces.

The plaster cast of my hands made from the alginate mould worked really well and carried through a lot of detail which is something that I wanted, however during our attempts to vac form this piece the plaster fingers broke upon removal of the plastic vac formed piece. The hand casts were also discoloured with clay, and since this piece was experimentation and not the final piece I wanted to create new pieces with the knowledge I had gained and more of a plan in my mind.

After thinking about it I decided that the two most expressionate parts of the human body are the hands and the face. The hands are able to create many different gestures that convey different meanings, and the face is capable of producing many expressions that translate into a variety of emotions.

I then had to think about the narrative I wanted to produce. I had already established that I wanted to base this piece around the boundaries that women and people of colour face in the art world, I still had to decide how exactly I wanted to portray how me and others within those minorities feel about the issue. At first I thought I felt sad about it, I thought that myself and others were sad about the restrictions placed upon us, but after further thought I realised we were angry. As many before us we have been restricted for too long, and at this point I feel that we’re allowed, in fact expected, to be angry about it. So I decided that I wanted to create a depiction of both distress and anger in my final piece. This left me to decide how I wanted to portray these emotions in the face and hands.

Initially after creating my first hand casts I felt that using hands alone would be engaging enough and decided to plan out how to display an array of hands all seemingly pushing through the boundary.

This was the first mock up I made of how I might display the hands – I wanted to create an array of hand gestures that all differently reflected the same emotion, however I felt that this may not be the most effective way to convey my point as the hands would be doing different things and the differences may distract from the narrative I wanted to convey.

This is the second mock up I created of how I could display the hands, I felt that a more organised approach may not distract the viewer as much as a disorganised array of hands might. I felt that the second approach may show unity if the hands were all in a line. However I was then faced with wondering how I could create the same narrative when using the same body part in different positions, and whether this would weaken the idea behind body of work.

After deliberating I decided that it would feel more personal to each person of the audience if the pieces resembled one person, and this way I am able to use a face within the work to reinforce the emotion. I also feel that doing it this way reflects on the inspiration I originally wanted to take from Julien Palast’s Skin Deep series. I created another mock up of how I wanted to display the pieces so I knew what to create and that I didn’t waste any time creating any pieces I did not need.

With this layout I feel that the separate pieces would resemble one person pushing through the boundary, rather than separate people doing so. By choosing to display it this way with two hands and a face I feel that I can visually show more emotion by using multiple body parts.

I also feel that by making the pieces look like one singular person each person who resonates with the piece would be able to imagine themselves being the person I’m depicting.

To depict both anger and distress I decided to create two upright fists. When picturing how a person would try to break down a physical boundary my mind pictured two fists bashing on a surface, and I felt that this would be relevant as even though the boundary I’m conceptualising is not physical, the physical sentiment would still resemble the same idea of breaking something down.

In terms of creating the face I had to think practically about being able to submerge my whole face within alginate as I wouldn’t be able to hold my breath long enough for the alginate to set. After revisiting Palast’s work I saw that he was able to capture emotions using only a partial area of the face. I felt that in terms of comfort, safety and the best result it would be ideal to submerge my face at an angle allowing myself to breathe whilst also capturing the emotion I would be expressing in my face.

Having decided to create three separate pieces me and Kostas began to set up the 3D lab to create them.

We reused the original MDF box we had made for the first mould as we were already aware that this size box could hold three bags of alginate mixed with 3 equal volumes of water and that this size box produced a good sized piece of work. I wanted the size of the whole piece not to cause the reliefs to be swallowed up, so I divided the box in two using a piece of cardboard. This meant we still knew how much alginate to use but that the pieces would be proportionate so the size of my hands.

We mixed the alginate and split it equally between the two compartments, I then plunged my fists into the mixture whilst it set. After a few minutes I removed my firsts and this was the impression left in the alginate. At first I was worried as the negative mould looked nothing like what I wanted the positive cast to look like, however Kostas reassured me that the eye is not very good at perceiving negative space and to wait and see what the positive cast looked like. We noticed that the mixture was bubbly as it had been the first time, however I felt that this would be an interesting texture for the background as it would create contrast between the background the the cast. 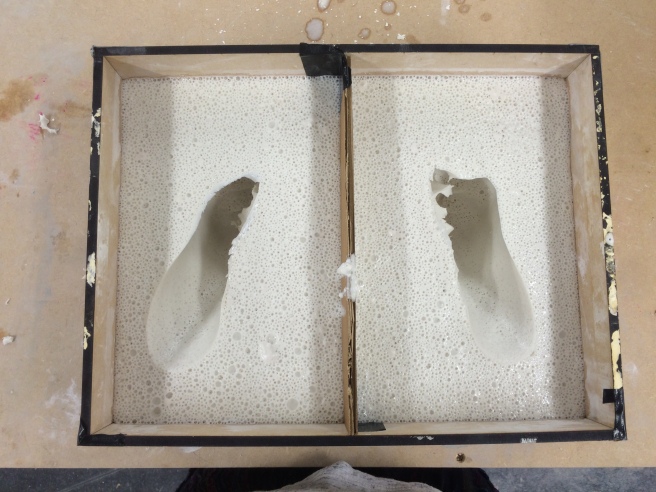 We then mixed two portions of plaster of paris, and marked on the box where we would pour up to, to make sure the backgrounds to both of the firsts were of equal depth. 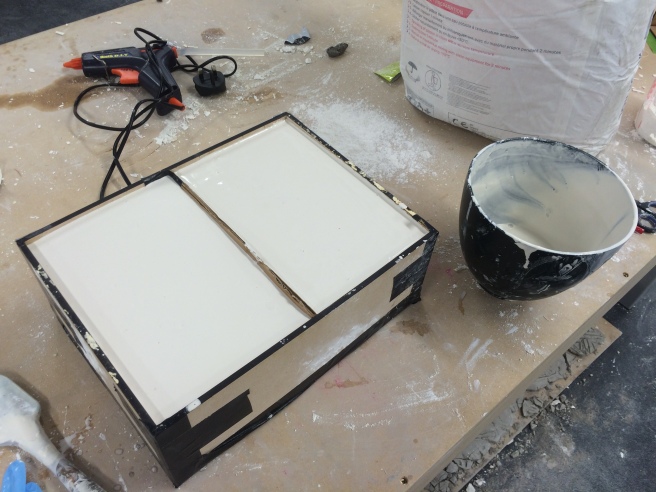 After 20 minutes the plaster had set and we deconstructed the box. Here you can see the separate layers of the alginate (on top) and the plaster (on the bottom).

After removing the alginate this is what I was left with. I am really pleased with how these pieces have turned out; the background does create a contrast between the background and the fists. The detail that the alginate had carried through to the plaster was impeccable. All the wrinkles and creases in my hands were visible and although there were some bubbles visible on my hands there is still a plentiful amount of detail.

I’m aware that I will have to sand down the sides of these pieces as some of the cardboard divide has attached itself to the sides, however aside from that I am pleased with how these pieces have turned out as I feel that they look as I wanted them to. They look like two firsts, poised in motion ready to bash on a surface.

I feel that these pieces are good enough to be displayed as part of my final piece. 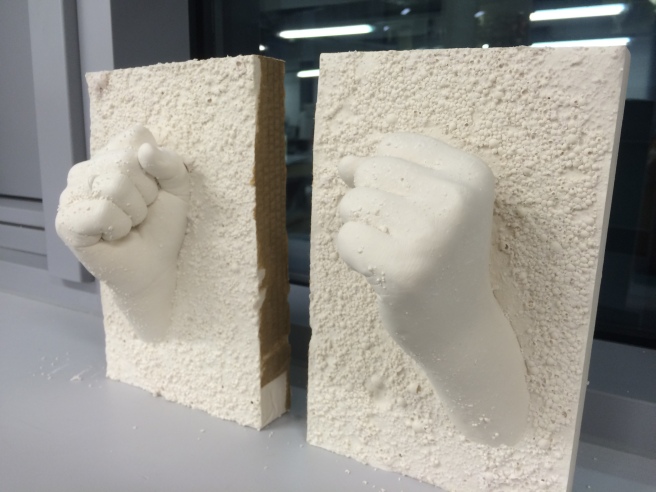 So, I’ve come to the end of this session as we did not have time to do all three moulds and casts in one afternoon, however we will be continuing to work on my final pieces tomorrow.